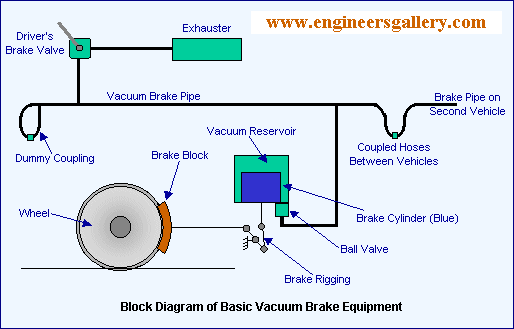 The vacuum brake was, for many years, used in place of the air brake as the standard, fail-safe, train brake on railways in the UK and countries whose railway systems were based on UK practice.  Here is a simplified description of the vacuum system.

The vacuum brake is a braking system employed on trains and introduced in the mid-1860s. A variant, the automatic vacuum brake system, became almost universal in British train equipment and in countries influenced by British practice. Vacuum brakes also enjoyed a brief period of adoption in the USA, primarily on narrow gauge railroads. Its limitations caused it to be progressively superseded by compressed air systems starting in the United Kingdom from the 1970s onward. The vacuum brake system is now obsolete; it is not in large-scale usage anywhere in the world, other than in South Africa, largely supplanted by air brakes.

In the earliest days of railways, trains were slowed or stopped by the application of manually applied brakes on the locomotive and in brake vehicles through the train, and later by steam power brakes on locomotives. This was clearly unsatisfactory, but the existing technology did not offer an improvement. A chain braking system was developed, requiring a chain to be coupled throughout the train, but it was impossible to arrange equal braking effort along the entire train.

A major advance was the adoption of a vacuum braking system, in which flexible pipes were connected between all the vehicles of the train, and brakes on each vehicle could be controlled from the locomotive. The earliest scheme was a simple vacuum brake, in which vacuum was created by operation of a valve on the locomotive; the vacuum actuated brake pistons on each vehicle, and the degree of braking could be increased or decreased by the driver. Vacuum, rather than compressed air, was preferred because steam locomotives can be fitted with ejectors; venturi devices that create vacuum without moving parts.

The simple vacuum system had the major defect that in the event of one of the hoses connecting the vehicles becoming displaced (by the train accidentally dividing, or by careless coupling of the hoses, or otherwise) the vacuum brake on the entire train was useless.

The automatic vacuum brake had been developed: it was designed to apply fully if the train becomes divided or if a hose becomes displaced, but opposition on the grounds of cost (particularly by the LNWR and its chairman Richard Moon) to the fitting of the automatic type of brake meant that it took a serious accident at Armagh in 1889 before legislation compelled the automatic system. In this accident at Armagh, a portion of a train was detached from the locomotive on a steep gradient and ran away, killing 80 people.[1]The train was fitted with the simple vacuum brake, which was useless on the disconnected portion of the train. It was clear that if the vehicles had been fitted with an automatic continuous brake, the accident would almost certainly not have happened, and the public concern at the scale of the accident prompted legislation mandating the use of a continuous automatic brake on all passenger trains.

How the automatic vacuum brake works

In its simplest form, the automatic vacuum brake consists of a continuous pipe—the train pipe—running throughout the length of the train. In normal running a partial vacuum is maintained in the train pipe, and the brakes are released. When air is admitted to the train pipe, the air pressure acts against pistons in cylinders in each vehicle. A vacuum is sustained on the other face of the pistons, so that a net force is applied. A mechanical linkage transmits this force to brake shoes which act on the treads of the wheels.

The fittings to achieve this are:

The brake cylinder is contained in a larger housing—this gives a reserve of vacuum as the piston operates. The cylinder rocks slightly in operation to maintain alignment with the brake rigging cranks, so it is supported in trunnion bearings, and the vacuum pipe connection to it is flexible. The piston in the brake cylinder has a flexible piston ring that allows air to pass from the upper part of the cylinder to the lower part if necessary.

When the vehicles have been at rest, so that the brake is not charged, the brake pistons will have dropped to their lower position in the absence of a pressure differential (as air will have leaked slowly into the upper part of the cylinder, destroying the vacuum).

If the driver now moves his control to the “brake” position, air is admitted to the train pipe. According to the driver’s manipulation of the control, some or all of the vacuum will be destroyed in the process. The ball valve closes and there is a higher air pressure under the brake pistons than above it, and the pressure differential forces the piston upwards, applying the brakes. The driver can control the amount of braking effort by admitting more or less air to the train pipe.

The progress represented by the automatic vacuum brake nonetheless carried some limitations; chief among these were:

THERE is a saying that “competition is healthy.” This in railway mechanics is decidedly so, as it makes for efficiency. One of the most outstanding examples is that of the rival braking systems, compressed air and vacuum.

Both are efficient and reliable ; each possesses advantages ; and before the general grouping of the railways, each had its adherents. The London, Brighton and South Coast, Great Eastern, North Eastern, London Chatham and Dover, and other lines used the Westinghouse air brakes, while the London and North Western, London and South Western, Great Northern, Midland, and others, pinned their faith to the vacuum automatic brake. Perhaps the best example of the rival brakes working side-by-side, as one might say, was that of the Underground in the old steam days, when the District locomotives and trains were provided with the Westinghouse apparatus and the Metropolitan had vacuum brakes. Both companies’ engines were identical, and often—as when running on the Inner Circle—worked exactly the same services over the same sets of metals. Even to the present day, the “rivals” go hand-in-hand ; on the Southern Railway, the electric trains use the quick-acting Westinghouse brake, and the steam trains are all vacuum-fitted. Each system gives perfectly satisfactory service.

The vacuum brake was invented while the compressed-air brake was in its infancy. It was hardly likely that any one system would be allowed to reign unchallenged ; and inventors who are always busy on the brake problem, hit on the idea of letting air at atmospheric pressure operate the pistons of their brake cylinders, by creating a vacuum in one end of the cylinder. Nature abhors a vacuum, and does her best to fill it with anything convenient. This can be demonstrated by a small glass syringe with a piston which is air-tight. Put a finger over the nozzle, and pull out the piston-rod as far as it will go ; this creates a vacuum in the syringe. Take away the finger, and air rushes in with a distinct hiss and “plop.” Repeat the experiment, but this time hold the nozzle under water before removing the finger, and water will rush into the syringe as soon as the nozzle is uncovered.

Again repeat the first experiment ; this time do not uncover the nozzle, but let go the piston-rod. It will fly back, because of the pressure of the atmosphere on the outside of the piston, and absence of pressure—hence no resistance—inside the syringe. Pull out the piston-rod once more ; attach a short length of rubber tube to the nozzle, and suck the air from the syringe. As one draws out the air and reduces the amount in the barrel of the syringe, the piston will move inwards, as the pressure of the atmosphere acts on the outer side of the piston ; and there one has the vacuum brake in the embryo.

The ejector is oneself, the rubber tube is the train pipe ; the syringe is the brake cylinder ; and if one attached the pull-rod of a miniature brake set to the piston-rod it would apply the brakes.

As with the compressed-air brake, the first vacuum brake was of the non-automatic. or “straight” type. Under the engine, and under each coach, was a brake cylinder which was not unlike a concertina, being collapsible. One end of the “concertina” was fixed, and the other end was attached to the brake pull-rods. All the “concertinas” were connected by a pipe running right through the train, connections between the carriages being made by flexible hoses with universal snap couplings, after the same style as the air brake.

Get Marks according to Grade: C Program

EngineersGallery - September 25, 2014
0
Here is a code that accepts marks of students and display the grade according to student's marks. Normaly each university has its own grade system,below... 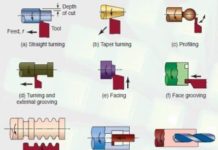 Forces acting on a Sunk Key