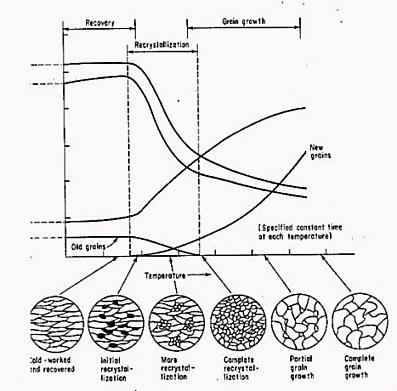 When metal is subjected to hot working and cold working processes, plastic deformation occurs which is an important phenomenon. Plastic deformation of metal distorts the crystal lattice. It breaks up the blocks of initial equiaxed grains to produce fibrous structure and increases the energy level of metal. Deformed metal, during comparison with its un-deformed state, is in non-equilibrium, thermodynamically unstable state. Therefore, spontaneous processes occur in strain-hardened metal, even at room temperature that brings it into a more stable condition. When the temperature of metal is increased, the metal attempts to approach equilibrium through three processes:

Fig. reflects the recovery, recrystallisation and grain growth and the main property changes in each region.

When a strain-hardened metal is heated to a low temperature, the elastic distortions of the crystal lattice are reduced due to the increase in amplitude of thermal oscillation of the atoms. This heating will decrease the strength of the strain-hardened metal but there is an increase in the elastic limit and ductility of metal, though they will not react the values possessed by the initial material before strain-hardening. No changes in microstructure of metal are observed in this period. The partial restoration of the original characteristics, produced by reducing the distortion of the crystal lattice without remarkable changes in microstructure, is called recovery. At the initial state, the rate of the recovery is fastest and it drops off at longer times at given temperature. Hence the amount of recovery that occurs in a practical time increases with increasing temperature. The individual characteristic recover at different rates and gain various degrees of completion in a given cold worked metal.

Formation of new equiaxed grains in the heating process of metal, instead of the oriented fibrous structure of the deformed metal, is called recrystallisation. The process of recrystallisation is illustrated through Fig. The first effect of heating of metal is to form new minute grains and these rapidly enlarge until further growth is restricted by grain meeting another. The original system of grains go out of the picture and the new crystallized structure is formed in the metal. Recrystallisation does not produce new structures however it produces new grains or crystals of the same structure in the metal. It consists in having the atoms of the deformed metal overcome the bonds of the distorted lattice, the formation of nuclei of equiaxed grains and subsequent growth of these grains due to transfer of atoms from deformed to un-deformed crystallites. Finer grains get refined and acquire a shape resembling fibres. The temperature at which crystallization starts, that is new grains are formed, is called recrystallisation temperature. Recrystallisation temperature is also defined as that temperature at which half of the cold worked material will recrystallise in 60 minutes.

On recrystallisation of metal, the grains are smaller and somewhat regular in shape. The grains in metal will grow if the temperature is high enough or if the temperature is allowed to exceed the minimum required for recrystallisation and this growth of grain is the result of a tendency to return to more stable and larger state. It appears to depend primarily on the shape of the grain. For any temperature above the recrystallization temperature, normally there is practical maximum size at which the grains will reach equilibrium and cease to grow significantly. However, there are certain kinds of abnormal grains growth in metal that occur as a result of applied or residual gradients of strain due to non-uniform impurity distribution, and which permits growing very large single grain in metal. Copied from Introduction to Basic Manufacturing Processes and Workshop Technology by Rajender Singh. 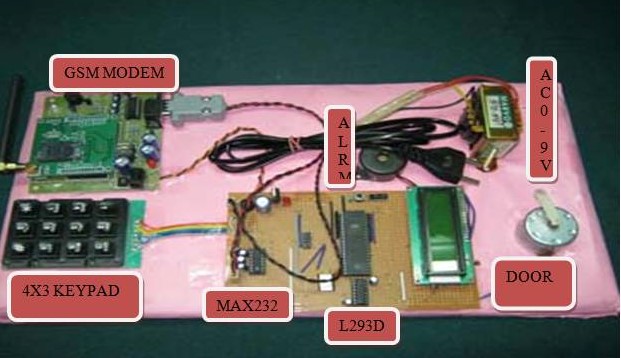 Amisha - December 2, 2015
0
ABSTRACT The main aim of this project is to provide efficient way of security for banks. Which is an advanced door lock system used in... 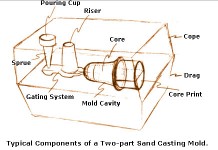