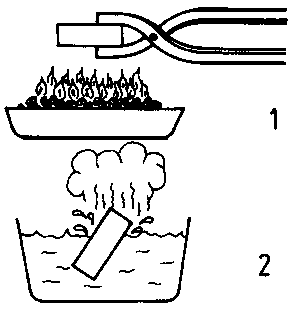 The major objectives of heat treatment are given as under

1. It relieves internal stresses induced during hot or cold working.

2. It changes or refines grain size.

3. It increases resistance to heat and corrosion.

5. It helps to improve machinability.

8. It improves electrical and magnetic properties.

9. It changes the chemical composition.

10. It helps to improve shock resistance.

Normalizing is a defined as softening process in which iron base alloys are heated 40 to 50°C above the upper-critical limit for both hypo and hyper eutectoid steels and held there for a specified period and followed by cooling in still air up to room temperature. Fig shows the heating temperature ranges for normalizing process of both hypo and hyper carbon steel. Fig. shows the structure obtained after normalizing of medium carbon steel.

3. Improve machinability after forging and rolling

For a particular type of structure specific cooling rate is required to have good annealing properties for free machining. As metal is slowly cooled after heating and holding in and with the furnace and buried in non conducting media such sand, lime or ashes, carbon steels are cooled down at particular rate normally 150-200°C per hour while alloy steel in which austenite is very stable and should be cooled much lower (30°C to 100°C per hour). Very slow cooling is required in annealing to enable austenite to decompose at two degrees of super cooling so as to form a pearlite and ferrite structure in hypo-eutectoid steel, a pearlite structure in eutectoid steel and pearlite and cementite structure in hyper eutectoid steel. In successfully annealed steel, the grains of ferrite are large and regular while pearlite consists of cementite and ferrite. Hypo-eutectoid hot worked steel may under go full annealing to obtain coarse grain structure for free machining. When steel is cold worked the hardness (Brinell hard) considerably increases and ductility decreases slightly. The ductility of steel may be then restored by so called recrystallisation or process annealing.

The purpose of annealing is to achieve the following

6. Increase or restore ductility and toughness.

Hardening is a hardness inducing kind of heat treatment process in which steel is heated to a temperature above the critical point and held at that temperature for a definite time and then quenched rapidly in water, oil or molten salt bath. It is some time said as rapid quenching also. Steel is hardened by heating 20-30°C above the upper critical point for hypo eutectoid steel and 20-30°C above the lower critical point for hyper eutectoid steel and held at this temperature for some time and then quenched in water or oil or molten salt bath.

If high carbon steel is quenched for hardening in a bath, it becomes extra hard, extra brittle and has unequal distribution internal stresses and strain and hence unequal harness and toughness in structure. These extra hardness, brittleness and unwanted induced stress and strain in hardened metal reduce the usability the metal. Therefore, these undesired needs must be reduced for by reheating and cooling at constant bath temperature. In tempering, steel after hardening, is reheated to a temperature below the lower critical temperature and then followed by a desired rate of cooling. Reheating the of hardened steel is done above critical temperature when the structure is purely of austenite and then quenching it in a molten salt path having temperature in the range of 150-500°C. This is done to avoid transformation to ferrite and pearlite and is held quenching temperature for a time sufficient to give complete formation to an intermediate structure referred to as bainite then cooled to room temperature. The temperature should not be held less than 4 to 5 minutes for each millimeters of the section.

Carburizing can be of three types

1. Pack carburizing : Metals to be carburized such as low carbon steel is placed in cast iron or steel boxes containing a rich material in carbon like charcoal, crushed bones, potassium Ferro-cyanide or charred leather. Such boxes are made of heat resisting steel which are then closed and sealed with clay.

2. Liquid carburizing : Liquid carburizing is carried out in a container filled with a molten salt, such as sodium cyanide. This bath is heated by electrical immersion elements or by a gas burner and stirring is done to ensure uniform temperature. This process gives a thin hardened layer up to 0.08 mm thickness.

3. Gas carburizing : In gas carburizing method, the parts to be gas carburized are surrounded by a hydrocarbon gas in the furnace. The common carburizing gases are methane, ethane, propane, butane and carbon monoxide are used in this process.

Cyanide may also be used to case harden the steel. It is used to give a very thin but hard outer case. Cyaniding is a case hardening process in which both C and N2 in form of cyaniding salt are added to surface of low and medium carbon steel. Sodium cyanide or potassium cyanide may be used as the hardening medium. It is a process of superficial case hardening which combines the absorption of carbon and nitrogen to obtain surface hardness.

Nitriding is a special case hardening process of saturating the surface of steel with nitrogen by holding it for prolonged period generally in electric furnace at temperature from 480°C to 650°C in atmosphere of Ammonia gas (NH3). The nitrogen from the ammonia gas enters into on the surface of the steel and forms nitrides and that impart extreme hardness to surface of the metal. Nitriding is a case hardening process in which nitrogen instead of carbon is added to the outer skin of the steel. This process is used for those alloys which are susceptible to the formation a chemical nitrides.

Induction hardening is accomplished by placing the part in a high frequency alternating magnetic field. It differs from surface hardening in the way that hardness of surface is not due to the increase in carbon content but due to rapid heating followed by controlled quenching. In this process, a high frequency current is introduced in the metal surface and its temperature is raised up to hardening range. As this temperature is attained, the current supply is cut off instantaneously water is sprayed on the surface. Heat is generated by the rapid reversals of polarity.

It consists of moving an oxyacetylene flame, over the part where hardening is required. Immediately after this, the heated portion is quenched by means of water spray or air passing over it. Temperature attained by the surface is controlled and the rate of cooling is controlled by selecting a suitable medium. Flame hardening is suitable for large sized articles where only some portions of the surface requiring hardening and hence there is no need to heat the whole article in the furnace. Copied from Introduction to Basic Manufacturing Processes and Workshop Technology by Rajender Singh.

EngineersGallery - May 12, 2015
0
SCRATCH EXTENSION ARDUINO Quick Start To use the extension, upload the StandardFirmata program to your Arduino board and then open the Arduino extension on ScratchX.org. Introduction This Scratch...

Design and Fabrication Of Gear and Spline Cutting Attachment In Lathe

Power Transmitted by a Belt