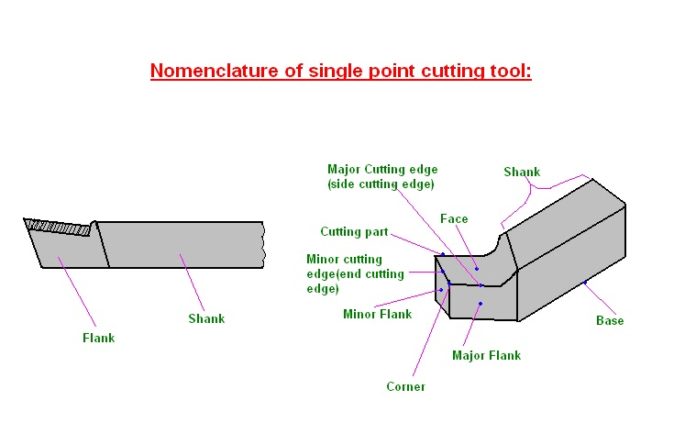 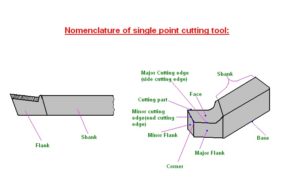 The elements of tool signature or nomenclature single point tool is illustrated in Fig.

(i) Back rake angle

It is the angle by which the face of tool is inclined side ways. This angle of tool determines the thickness of the tool behind the cutting edge. It is provided on tool to provide clearance between work piece and tool so as to prevent the rubbing of work- piece with end flake of tool. It is the angle between the surface the flank immediately below the point and the line down from the point perpendicular to the base.

It is the angle that allows the tool to cut without rubbing on the work- piece. It is defined as the angle between the portion of the end flank immediately below the cutting edge and a line perpendicular to the base of the tool, measured at right angles to the flank. Some time extra end clearance is also provided on the tool that is also known as end clearance angle. It is the secondary angle directly below the end relief angle.

It is the angle that prevents the interference as the tool enters the material. It is the angle between the portion of the side flank immediately below the side edge and a line perpendicular to the base of the tool measured at right angles to the side. It is incorporated on the tool to provide relief between its flank and the work piece surface. Some time extra side clearance is also provided on the tool that is also known as side clearance angle. It is the secondary angle directly below the side relief angle.

It is the angle between straight cutting edge on the side of tool and the side of the shank. It is also known as lead angle. It is responsible for turning the chip away from the finished surface.

It is the nose point connecting the side cutting edge and end cutting edge. It possesses small radius which is responsible for generating surface finish on the work-piece.

Source A Textbook of Basic Manufacturing Processes and Workshop Technology by Rajender Singh. 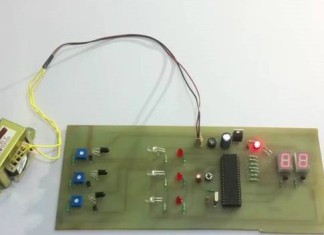 Amisha - December 21, 2015
0
Automated Visitor Counter Introduction: The system is designed for optimum energy usage and is very beneficial in case if we want to count the number of...

Dam Operation Based On Water Level 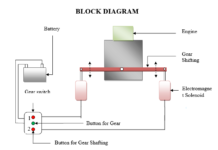