Initial Tension in the Belt

When a belt is wound round the two pulleys (i.e. driver and follower), its two ends are joined together, so that the belt may continuously move over the pulleys, since the motion of the belt (from the driver) and the follower (from the belt) is governed by a firm grip due to friction between the belt and the pulleys. In order to increase this grip, the belt is tightened up. At this stage, even when the pulleys are stationary, the belt is subjected to some tension, called initial tension.

Similarly, decrease in tension in the slack side
= T0 – T2

Assuming that the belt material is perfectly elastic such that the length of the belt remains constant, when it is at rest or in motion, therefore increase in length on the tight side is equal to decrease in the length on the slack side. Thus, equating equations (i) and (ii), we have 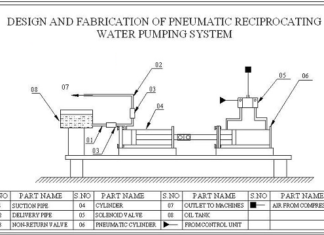 Siddharth Rajvanshi - October 7, 2016
0
Design and Fabrication of Pneumatic reciprocating Water Pumping system SYNOPSIS: The main objective of this project is to pump the water with very less electric power....

Design and Fabrication Of Gear and Spline Cutting Attachment In Lathe