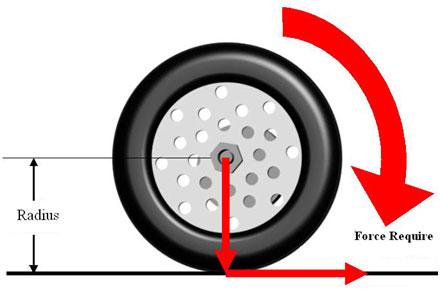 Electric motors are the most convenient ­­devices in use which can convert the electrical energy into mechanical energy. Electrical motors converts the electrical energy to rotational motion which can then be easily converted to any kind of mechanical motion like moving a robotic arm, moving a needle in a sewing machine etc. The Permanent Magnet Direct Current (PMDC) motors are especially useful since they are very easy to control, produce a lot of power and come in various sizes, shapes and voltage ratings.

When used with electrical or electronic circuits one must be careful about certain things like the current consuming, torque, RPM etc. This article mainly discusses those things and also the details of circuits which can be used to drive the PMDC motors.

This section is devoted for explaining the most important terms related with a PMDC motor like ‘load’, ‘torque’, ‘RPM’ etc. The capability of a PMDC motor is usually mentioned in terms of torque and RPM.

Torque of a motor is the rotational force which it should generate so as to accelerate a Load attached to its shaft to a required rotating speed.

In the case of a motor the rotating body could be anything like a robotic arm, wheels of a toy car etc. If the motor is running with the rotating body at the required speed then it can be said that the motor is generating enough torque as required.The relation between the torque and the load is shown in the following equation;

When a motor accelerates a load ‘L’ from 0 RPM to a constant RPM within ‘t’seconds, then the torque generated can be found as

Torque is actually a kind of force whose value increases as the distance from the center of rotation increases. Consider the below figure in which a rolling wheel is shown which is driven by a motor.

T is the torque required,

F is the amount of force that should be applied and

D is the distance from the center of the shaft to the point where the torque is measured, in the case of a wheel like the one shown in the above figure the distance is the radius of the wheel itself.

Hence simply by increasing the diameter of the wheel the torque can be increased.The unit of the torque is Newton Meter (Nm)

The value of the KTmight be available in the datasheet of a DC motor or else it can be calculated from the value of other parameter given in the datasheet like NOMINAL TORQUE and NOMINAL CURRENT, which are actually the normal values of torque and current at which the motor is supposed to operate.

The torque constant can be calculated as; 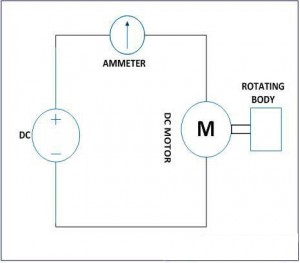 In the circuit an ordinary multi-meter can be used in power measuring mode as an ammeter which will display the value of current consumed by the motor at different loads.

KT= NOMINAL TORQUE / NOMINAL CURRENTas 0.003 and the current consuming by the motor while running at the RATED VOLTAGEwith an unknown load is 10mA, the torque generated by the motor can be calculated as follows

The speed of a motor is usually mentioned in terms of RPM (Rotationsper Minute).  There is a relation between the RPM, voltage applied and the current consuming for a particular motor.

Consider the following figure in which the internal equivalent circuit of the motor running at a DC supply of ‘V’ is shown; 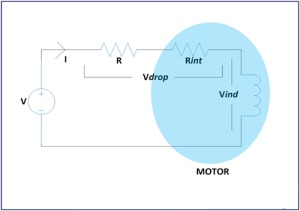 It is already discussed previously that the torque is always proportional to the current flowing through the circuit by a proportionality constant KT. Similarly the speed and the voltage induced ‘Vind’ is also proportional to each other by the same constant.

Vind is the induced voltage in the coil

S is the speed in the unit of radians/seconds

Since the Vind can’t be measure directly since in real the ‘Rint’ and the coil together forms the winding coil of the armature. Since the same current ‘I’ flows through the resistance and the coil the following equation is more useful in finding the speed in RPM with respect to the applied voltage ‘V’.

The ‘V’ is the constant DC voltage supplied, the Rint is a constant which might be given in the datasheet as COIL RESISTANCE or can be measure using a multi-meter, ‘KE‘which is same as ‘KT‘ can be calculated as discussed in the previous section and the ‘R’ is a known value of resistance.The following circuit can be used to do the calculate the speed of a motor at different torquerequirement and at different values of ‘R’;

It can be found that as the torque requirement increases the current ‘I’ increases. Hence for a particular value of current ‘I’, using the previous equation for calculating speed; 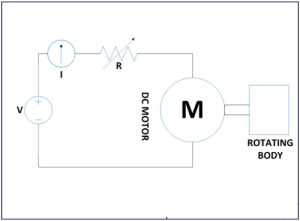 The power is defined as the product of the torque and the speed. If the speed is calculated in RPM the the power is given by the equation

P is the power calculated

T is the torque generated

RPM is the speed of the motor

When a motor accelerates a load ‘L’ from 0 RPM to a constant RPM within ‘t’ seconds, then the torque generated can be found as 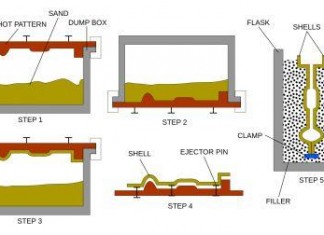 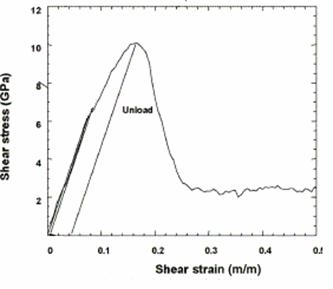 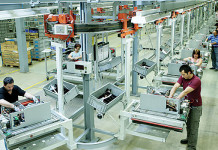 Introduction to ARM7 Based Microcontroller (LPC2148)